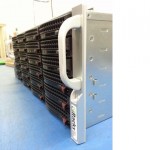 eRacks Open Source Systems announces the immediate availability of the eRacks/NAS36 rackmount storage server, with 36 removable 3.5″ hard drives, which yields a maximum of 144TB (Terabytes*) of raw storage with current widely-available technology. The eRacks/NAS36 rackmount server is shipped pre-configured to the user’s custom specs, with any available open-source software, and more flavors of Linux or BSD available than any other vendor.

Available immediately, it combines a rack usage of only 4U with a density of 36 drives (24 front and 12 rear), which, when combined with the current technology of widely available 4TB drives, yields a total storage of 144TB.

With the forthcoming 6TB drives from WD HGST, this will increase to 216 Terabytes*, giving a truly petascale solution in only 4U of rackspace.

When populated with 36 removable drives in only 4U, this represent a density / price breakthrough – using the best value (lowest price/TB) 3TB drives, this enables 108TB of raw storage in only 4U, and for less than $20,000, as configured on the eRacks website.

The unit is also available partially populated, at a reduced price, to make it accessible at a lower initial price, and the storage 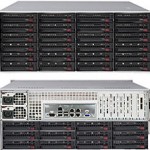 can be increased later by filling the empty drive trays.

It’s signature service, eRacks will be happy to install any of the popular Linux distributions on request – Ubuntu, Debian, RedHat, Centos, Fedora, even the Arch Linux distro, which is growing fast in popularity, as well as FreeBSD, OpenBSD, or other Open Source OSes.

eRacks will also pre-install any open source NAS software, such as FreeNAS, OpenFiler, NAS4Free and OpenMediaVault, among others – and administrative dashboards and web GUIs are offered on most of these software choices.

In addition, the eRacks policy is to install any Linux/BSD distro or Open Source software on request – Contact eRacks today at info(at)eracks(dot)com to see how they can meet your needs.

*For the purposes of this press release, the term “Terabyte” is used to mean one trillion bytes – eRacks understands the issues about this, we are using the term as the disk drive and other industry manufacturers use it.

Debian 7.3 is now available in the OS Dropdowns on most or all eRacks Systems.

If you don’t see what you want, just ask us – http://eracks.com/contact

Here’s the paraphrased original notice from the Debian Project:

The Debian project is pleased to announce the third update of its stable distribution Debian 7 (codename wheezy). This update mainly adds corrections for security problems to the stable release, along with a few adjustments for serious problems. Security advisories were already published separately and are referenced where available.

Please note that this update does not constitute a new version of Debian 7 but only updates some of the packages included. There is no need to throw away old wheezyCDs or DVDs but only to update via an up-to-date Debian mirror after an installation, to cause any out of date packages to be updated.

New installation media and CD and DVD images containing updated packages will be available soon at the regular locations.

Upgrading to this revision is usually done by using the aptitude (or apt) package tool.

This article is geared toward eRacks customers who have a desktop or laptop system, i.e. a personal workstation.  It is not intended to serve as a guide for customers wishing to upgrade a server.

With the above in mind, for those who use Linux on  such a machine, your choice of distributions that cater to this niche is growing nicely.  You have the “Big Boys” such as Ubuntu, Fedora, Mandriva or OpenSUSE, as well as a host of more specialized distributions, the main focus of most being on user friendliness and “up-to-dateness.”  What this usually leads to is a faster upgrade cycle than what you would typically find on a server oriented distro such as Debian (stable), RedHat Enterprise, SuSE Enterprise or CentOS.

I myself have been tracking RedHat (including Fedora) since version 5.0, doing a mix of upgrades and fresh installs.  I have also kept up with Ubuntu since 6.04, and have had similar experiences with it.  I have found that one way of making regular upgrades easier is to keep a separate /home partition.  This way, you have a choice of an upgrade or a fresh install, without losing valuable data.

My experience, and that of many other salty seasoned Linux gurus, is that upgrading from a previous version tends to be a bit messier and usually takes longer to do than a fresh install.  This can be true, especially if you use third party repositories, if you install software not maintained by your distro package manager (DEB or RPM) or if you do a lot of tweaking.  Doing so may leave you looking at a broken system when the upgrade finishes.  For this reason, it is usually more desirable to do a clean installation and install your third party applications afterward.

While most modern desktop distros have a default partitioning scheme that gives you just a swap partition (usually about 2x the amount of RAM, or physical memory) and a large root partition for everything else, most server configurations have multiple partitions for directories like /usr or /var, which can have many advantages.  For example: if you wanted to have /usr mounted as read-only to prevent unauthorized system-wide software installs, if you wanted to keep /boot separate for a RAID array or if you wanted to keep /var and /tmp separate to avoid corrupting the core system files; these are all examples of why one might want to make use of multiple partitions.  In this case, however, the partitioning must be very carefully planned according to the intended use of the server, what programs need to be installed, how many users will be logging in, etc.

Luckily, there is a happy medium that works well for desktops, and that is to use a swap partition with 2x the amount of RAM, a root partition for your operating system and a very large /home partition for all your data.  When you do a fresh install, all you have to do is make sure you don’t format /home, and your data will be safe across installations.  If you want to save any system-wide tweaks, you will, of course, also have to backup important configuration files and check them against their replacements, making changes where necessary.

In my case, I have a 120GB hard drive for Linux, which makes use of the following partition scheme:
20GB /
75GB /home
1GB /swap
14GB “other” (at times it has a Gentoo install, other times it has FreeBSD, depends on my mood…)

I have found through experience that this setup works well.

When I do an OS update, such as my recent one to Fedora 9, I usually backup important configuration files to /home, do a fresh install and finally install any third party programs I need.

In the past, when upgrading systems without doing a fresh install, things for me have tended to get rather wonky.  However, I have recently tried upgrading Ubuntu, and I must say that the recently improved Upgrade Manager, a graphical front end to the apt-get dist-upgrade functionality, is a nice touch.  It allows you to upgrade to the next version of Ubuntu, while still allowing you to run your system so you can go about your business as it downloads and installs all the packages.  When it’s done, you simply reboot, and voila, new version!  Upgrades on Fedora, by contrast, are still usually done by the tried and true method of booting the install disk and running the upgrade procedure.  Fedora does have the capability to do upgrades using the yum package manager, but that functionality isn’t as mature as apt-get dist-upgrade, and thus is not for the faint of heart.

So now, what if you have an existing Linux installation utilizing only a single partition and you want to do a fresh install while keeping your data safe?

Of course, you could just back your data up to a large external hard drive, but not everyone has one at their disposal.  In this case, what you could try is resizing your root partition, create a new partition for /home and copy your personal data to it before starting the upgrade.  Then, just run through the installation as usual.  This is, of course, only if you have enough space to resize.  If not, you may still require an external drive, at least temporarily, to copy your data to before starting the installer.

If you want to make use of multiple partitions on a new eRacks system purchase, just ask for it during your order.  This way, your system will be ready when the next OS update rolls around!