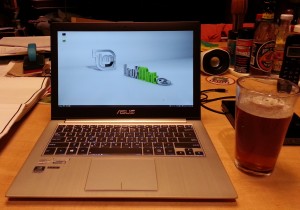 I am typing this on a nifty new eRacks/ZENBOOK13, with Linux Mint15 installed.

This is a slightly newer rev of the very pretty Asus Zenbook line, with twin 128GB SSD modules installed in a small carrier which screws into the standard 2.5″ HD space (it could also be replaced or upgraded with one of our standard HD/SSD choices, here: http://eracks.com/products/laptops/ZENBOOK13/)

This post will walk you through what we had to do for the installation, with the details.

I must say, this is a BEAUTIFUL machine – I want one myself!

Between the FullHD display, and being roughly the same thickness and sizeas the magazines I often carry into any given bar / restaurant here in Los Gatos, this is a joy compared to my regular 1920×1080 Asus laptop..

…And it beats the heck out of a tablet..

…And the battery life seems great, it barely made a dent in the hour or so I spent surfing with it while drinking my beverage of choice at one of the local establishments here.

…And did I mention it’s screaming fast, with the i7 CPU and 10GB RAM?!