Do you have a server lying around someplace that spends a significant amount of time in idle? If so, you might want to consider running the Folding@home client. Folding@home is a project based at Stanford whose goal is to simulate and study protein folding, which is crucial in order to understand and develop better treatments for serious diseases such as Alzheimer’s. 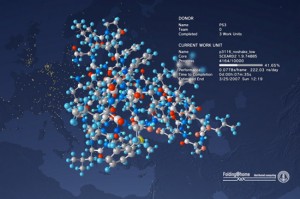 An example of the Folding@home client on a Playstation 3

Folding@home has been one of the most successful examples of distributed computing, whereby individuals all over the world donate spare CPU cycles in order to perform calculations and send the results back to a central location. The project started back in October of 2000, and has since resulted in the publication of over 40 works, and has lead to significant progress in the fight against Alzheimer’s. To date, the Folding@home project has been and is being used to study Huntington’s Disease, cancer, Alzheimer’s and Parkinson’s, among other serious medical conditions.

The Folding@home client runs on Windows, Mac OS-X, Playstation 3 and Linux, and will run in the background while your computer completes other tasks. If you want us to install it for you, just say so in the notes field of your order. In addition, if you wish to make a donation to the project, just specify “Donation Target: Other Open Source Project” and specify Folding@home in the notes field.